Mr. Dancey will be participating in the end of the season group show at Re:View Contemporary Gallery in Detroit. His piece, entitled “Wouldn’t It Be Pretty If It Was?” was completed about an hour ago and is ready for you to view it when the show opens Saturday November 10. 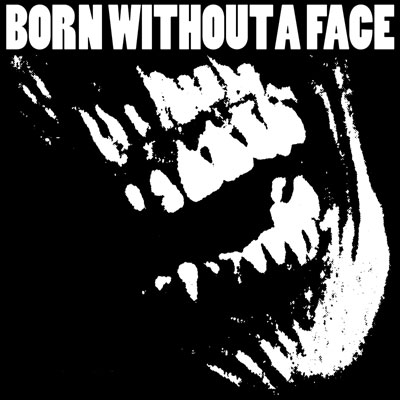 Ladies and gentlemen, punkers and skins, we are proud to announce that the long talked about vinyl re-release of recordings by Mr. Dancey’s 1980s hardcore punk outfit is now a reality.

The band in question, Born Without a Face, was active from 1983 to 1986. The group had a ferocious guitar-driven sound with metallic influences, though the playing was always too raw to be considered metal. The band’s recorded output consisted of two cassette tapes, “Psych!” (1984) and “Freakshow” (1985), and two 7” vinyl EPs, “The Unbecoming” (1986) and “Worship” (1987), all on the band’s own Crucible imprint. After recording the final EP, Born Without A Face disintegrated.

“Born Without A Face Sound Recordings, 1984-1986”, out now on Detroit’s Sargent Cherry Records, consists of 23 tracks spread out over two 12-inch LPs on 210-gram vinyl, each in its own hand-silkscreened sleeve. The first LP collects all the tracks from the the band’s “Freakshow” cassette and puts them on one record, restored and re-mastered from the original studio tapes. Until now, “Freakshow” has never been available on vinyl or CD. The second LP collects songs that were originally released on the band’s two 7″ EPs. Also included in this set is a 22-track CD (vinyl includes one bonus track), three original 11” X 17” screen-printed release posters, and a sticker, all enclosed in a handmade 19″ x13″ magnetic-closure portfolio. 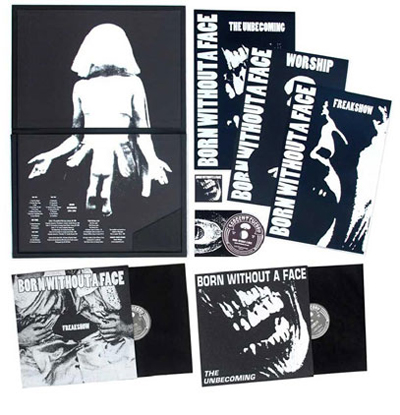 Mr. Dancey is participating in the 2012 version of LYRIC, the popular group show curated by Glenn Barr, which features a gang of artists who have produced pieces based on song lyrics. The show runs from Saturday April 21 through May 15 at Gallery 323 East in Royal Oak, Michigan. Mr. Dancey’s work is painted on a vinyl LP and is called “Who’s That Knocking at My Door Cried the Fair Young Maiden” aka “Barnacle Bill the Sailor.” Here’s what it looks like. To learn more about the show, why not visit 323east.com ?

As mentioned elsewhere in this site, Mr. Mark Dancey was heavily involved with Motorbooty Magazine from its obscure beginnings in 1987 to its ultimate demise 1999. Seeing that we have never really taken the trouble to explain what Motorbooty was about to visitors who might have missed out on Motorbooty experience, the renowned artist Mr. Frank Santoro took it upon himself to assemble a feature on the mag for the Comics Journal. Frank runs it down for the kids thusly:
http://www.tcj.com/motorbooty-the-better-magazine/ 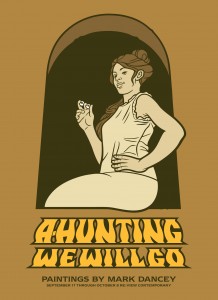 Brothers and Sisters, children and dogs, if you are like us here at Iluminado, you frequently find yourself pausing in your daily tasks to ask, “What’s Dancey doing?” Well, we are pleased to announce that, after many months without word, we finally have an answer to that question, and it’s neither anything shameful nor illegal. No, Mr. Dancey is in fact quite busy putting the finishing touches on a show of new paintings. Entitled “A-Hunting We Will Go,” it consists of work that is painted in a limited palette that recalls sepia photographs of the past and depicts various hunter’s eye views of eye catching huntresses. The exhibit opens on September 17 at Re:View Contemporary Gallery in Detroit and runs through October 8. Of course you will be able to view the stuff at Iluminado.us 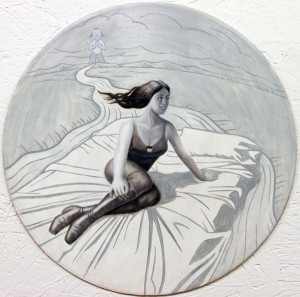 Mr. Mark Dancey will be participating in LYRIC, a group show curated by internationally renowned painter Glenn Barr. The theme of the show is illustrated song lyrics. Mr. Dancey chose the old standard “Cry Me a River,” and executed the work on an old LP. Too bad he chose not to supply us with an image of the piece. You can see it yourself at Gallery 323 East in Royal Oak, Michigan, or visit 323east.com. The opening reception is Saturday March 19 and the works will be on display until April 19.

Back in the day (1991, to be exact), Mr. Dancey took on an assignment to illustrate the “Badmotorfinger” album for the Soundgarden band. In the ongoing effort to clear out the archives, Mr. Dancey has unearthed this little item that shows how the iconic grunge album could have ended up looking a lot different than it actually did.

After the artwork was turned in, the art department produced a proof of the cover based on Dancey’s color specifications. Dancey proposed that the band’s name appear in lime green, while the blurred photo of the band in the background appear in purple, and that the “flip-off finger wheel” illustration in the center appear in metallic gold. The record company did not want to spring for the extra expense of metallic gold ink, so the center illustration was colored a transparent yellow. Luckily, this color scheme was rejected. The band thought the end was result was too “Manchester” and convinced the record company to color the center illustration in metallic gold, with the band’s name appearing in red and the photo appearing in violet/black.

Mr. Dancey is offering his only copy of this grunge-era oddity for sale.

Click here to check out this and other auctions of Ebay.

Although Mr. Dancey is best known as a painter, graphic artist and gentlemanly bon vivant, he also sometimes produces the odd three-dimensional object of virtue and utility. In order to best display these items, we here at Iluminado thought it best to add another department to our collection.We are pleased to announce that the new 3-D Section of our site is now open, and we cordially invite you to browse it.

With your entertainment and edification always in mind,

Completed in record time in order to be included in Re:View Gallery’s upcoming “Re:Collect” exhibition, here the latest work from Mr. Dancey. Executed in greasy oil on a compact 4.5 inch masonite panel, it is entitled “The Consolation of Philosophy.” Mr. Dancey always does a complete preparatory drawing before transferring the image to the panel, and we have included it here so that you can get a “before and after” view of the piece.